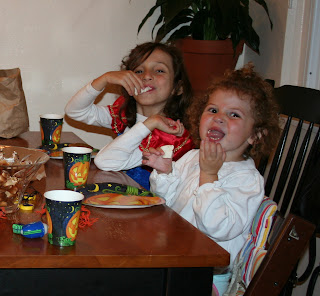 Ellie received her first feeding evaluation when she was around a year old.  She began refusing a spoon at 10 months of age, and had several other sensory and milestone issues by 12 months. Since we were also in the limited foods, and FPIES what-should-we-feed-now guessing game, the feeding evaluation seemed to go nicely with the nutritionist recommendations. We had a great evaluation and she recommended follow up, but insurance didn't pay.  She had given me several things to work on and it took months to come close to conquering those, so I had no desire to go back for more of the same.

Her second feeding evaluation came around the time she turned 2.  This evaluation was focused a lot more on her increased sensory processing issues, and what the therapist called being 'hyper aware'.  Ellie still had lock jaw and would not let me feed her a spoon or brush her teeth at this point.  Of course she was still on primarily broth at the time, so I think we became a feeding therapist worst nightmare.  Instead of suggesting foods, she focused on introducing us to skin brushing to help Ellie begin to process exterior input a little better.  Insurance didn't cover this either so we did not go back.  At home Ellie did not tolerate the skin brushing at all, and some very knowledgeable friends suggested trying pressure therapy so I did.  This worked for quite a while, especially during her sensory melt downs.

We have better insurance now, and so I asked for Ellie to be referred for evaluation again.  Her neurologist felt she needed to begin with an extensive neuro-psych evaluation to eliminate Autism first (whatever?!).  I figured that would get us in the door to finding an appropriate therapy team for Ellie. So we went. Four hours later and a team of doctors and interns staring at us through a one way glass, we were told she does not have Autism (duh), and that she is on par for an average preschooler. In fact the doctor said it was quite remarkable the growth and adjustment that had been made in the last 12-18 months, to which I gladly explained was due to her change in treatment (we started GAPS).  We were then referred for speech evaluation, feeding evaluation, and occupational therapy evaluation, and told she appeared neuro-typical aside from controlled, food-induced seizures.

In addition to still being on a bottle, Ellie has been hugely attached to the pacifier (which we call a soother and she calls a soo-soo).  We told her that she could get a prize when she threw them all in the garbage. The conversation went something like this:

So I figured we would be toting that stubborn girl's pacifiers around until she went to college. Alas, on the one day of the year I said I would never leave the house (Black Friday) Ellie walked over to the garbage, tossed them all in, looked at me, and said "What my prize?" Off to the store we went for her heart's desire - a stuffed tiger like her sisters.  It made this mommy sad that she simultaneously gave up her bear, which she has used for sensory soothing since she was an infant. Bear, soo-soo, and blanket were the must have trio for sleeping, and woe were we if we went out and left any of them at home.  She is hanging on to the blanket still, occasionally asks for a pacifier, but poor bear doesn't even get a glance.  Sad, sad day.

Last week we headed off for her fourth feeding evaluation, and arrived to find we were working with a speech therapist. Hmm.  I went with it.  She was very warm and put a lot of effort and energy into helping it be a productive appointment.  She had reviewed Ellie's super thick file and was more aware than most of the doctors we have encountered.  I did not have to go through her medical history much at all, which was incredible.  In fact, I think I might fill out one of those nice 'star reports' that they have in the office the next time we go in.  She admitted she did not have many specific foods to suggest, but gave me great ideas instead.  She suggested dipping activities, and to not focus on Ellie actually eating but to just get her to the table by making it desirable and fun.  My biggest hang up was that all of her MD approved handouts recommended ridiculous things for therapy.  Cheez Whiz? Seriously? But Ellie warmed up to her nicely and we went home armed and ready to cut up pancakes with knives, and play basketball with toothpicks and meatballs.  This all seemed quite ridiculous to me, but within a couple days Ellie was asking to feed me and joining us more at the table.


She has also always sat in the same chair eating her bottle the same way for 2 years now. The house is filled with tragedy whenever the chair must be washed and temporarily unavailable.  Now she has been eating her bottle in various places around the house!

Overall we are making progress. It seems like a crawl but we are still moving in a forward motion.  I have been convinced her lack of chewing is due to her lip tie, but a friend's daughter (same age, same diagnosis, same lip tie) just began chewing away, so I am no long so convinced.  My absolute biggest hope is that we can get some solids into her and that might trigger a full night sleep.  At this point in the game my body is dragging from waking up multiple times every night. Thank goodness Daddy helps with that!