Ellie has a food aversion. She doesn't take the spoon, she refuses to let us feed her, and she often does not put things in her mouth or swallow them at all. We have spent days reflecting on this, and have had doctors recognize her delays as being connected to her protein intolerance. We have discussed how she has learned this behavior because of pain. But today I wonder if that is the case.

Every FPIES mom, at some point, must tell their child 'no, you can not eat that'. Today I found a post I wrote when Ellie was 13 months old. She wanted food. She fought me for food. And I told her no. For the sake of keeping her safe, I would not let her join in on what she saw us all doing - eat.

She was 13 months old. She was not at baseline, and she was most definitely in pain. She was bloated and had never known what it was like to not barf everything up that she put in her mouth. Yet she still begged. And reading this older post had made me wonder - perhaps it is more of a learned behavior, that we now have to un-do. I have spent months running around behind her, taking things out of her hands, out of her mouth, and not letting her have anything except for her bottle. Can I blame her that she is so attached? Can I be surprised that she wants nothing else, and that she is offended and visibly shook when I try to even change the nipple?

Another FPIES mom recently had her twins go from not eating, to swallowing and asking for more soup, within a matter of days. That to me is amazing. And that to me shows that this is something that is now up to Ellie. I have taught her to be protective of her own mouth, and have shown her the importance of being careful. Now I pray that she will move past that sense of security and become a part of our family table. 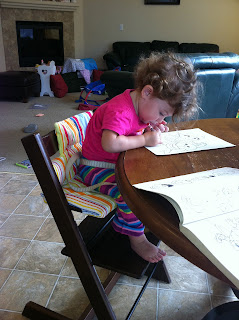 I searched for months on craigslist until I was able to find a specific high chair that would allow her to be at the table with us and look like us.


She is using it, and in the last week she asked twice to be fed water from a bowl while we ate dinner. Last night I tried to feed her broth the same way, and she was less receptive.

Perhaps she will soon make the connection of making that food fill up her belly. And perhaps she will understand that it does not have to come from her bottle. Until then, I suppose I have a toddler on a bottle. Oh, well!
Posted by Nichole at 3:49 PM